So, I see this post: http://www.doodiepro...as-so-up-tight/ and decide I should log in to Global Village and take a peek, as it’s been a while.

Odd, my passwork no longer works. I do a password reset. This is curious as I had not logged in since August 2017. The password reset works.

When last I left, I didn’t have posting privileges (still don’t) unless my posts are approved by Vince. I haven’t seen much point in logging in and attempting to participate after Vince repeatedly censored my posts.

Ah, I see Vince attempted to dox me by changing my “Rank” to my Doodie screen handle (I doxxed myself on here recently, no big mystery on how he figured that out). Can anyone else change their rank? Didn’t think so.

In mock outrage, Vince responds (to himself):

Hell no. We're not having that brouhaha spill over here at the Global Village.

He later re-opens the thread to post a copy of Mike’s letter.

So, Vince is willing to abuse his position of authority on “his” IPSC Forum by impersonating a member of IPSC, then posting material in that member’s name that he supposedly doesn’t want posted on the Global Village, then responding indignantly about the post that he made. Then posting more on a thread he locked.

If you had any doubts about what kind of person Vince is, what he is willing to do, or yet another example of how he abuses his authority on Global Village, allow me to put those doubts to rest. 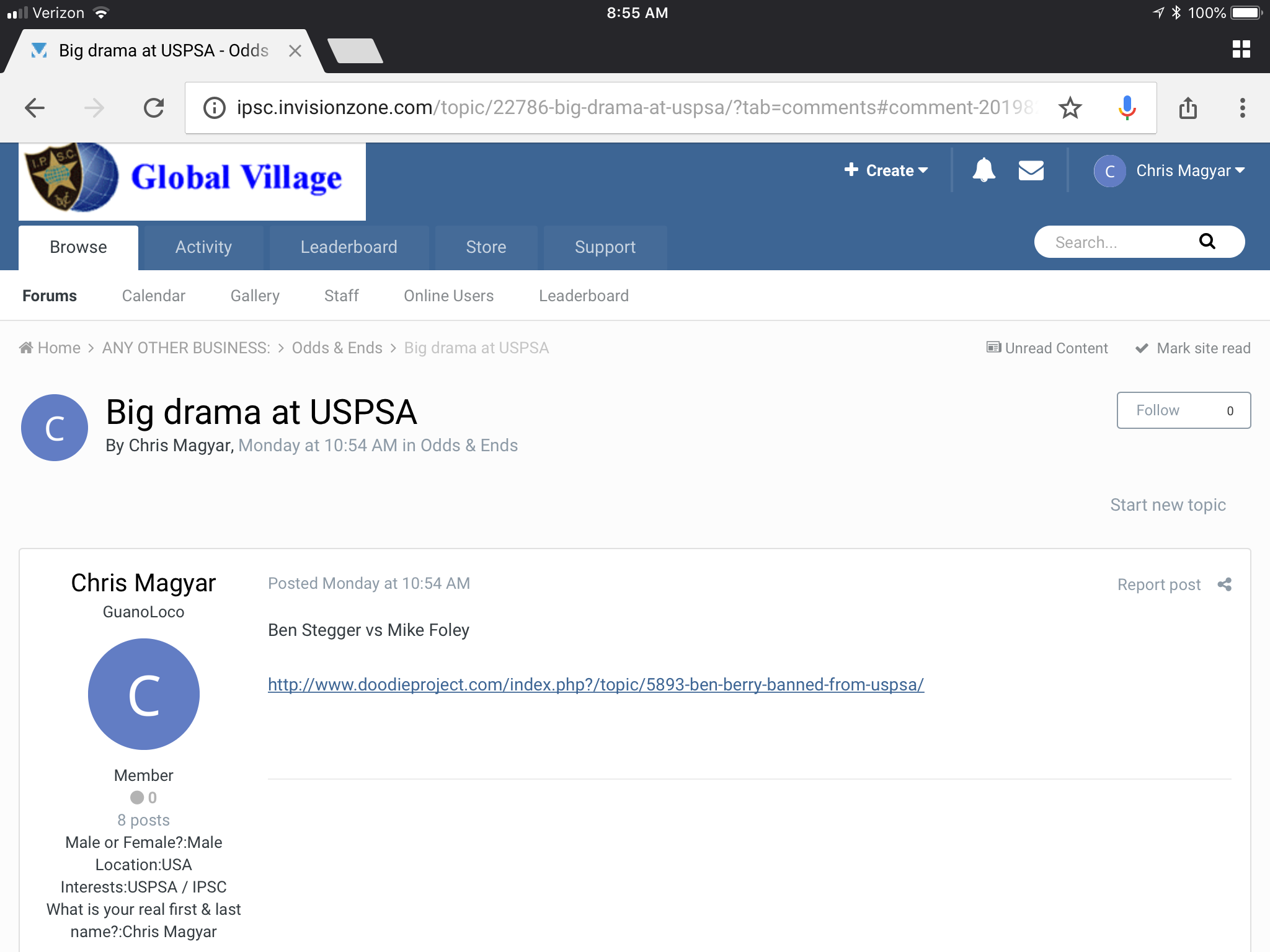 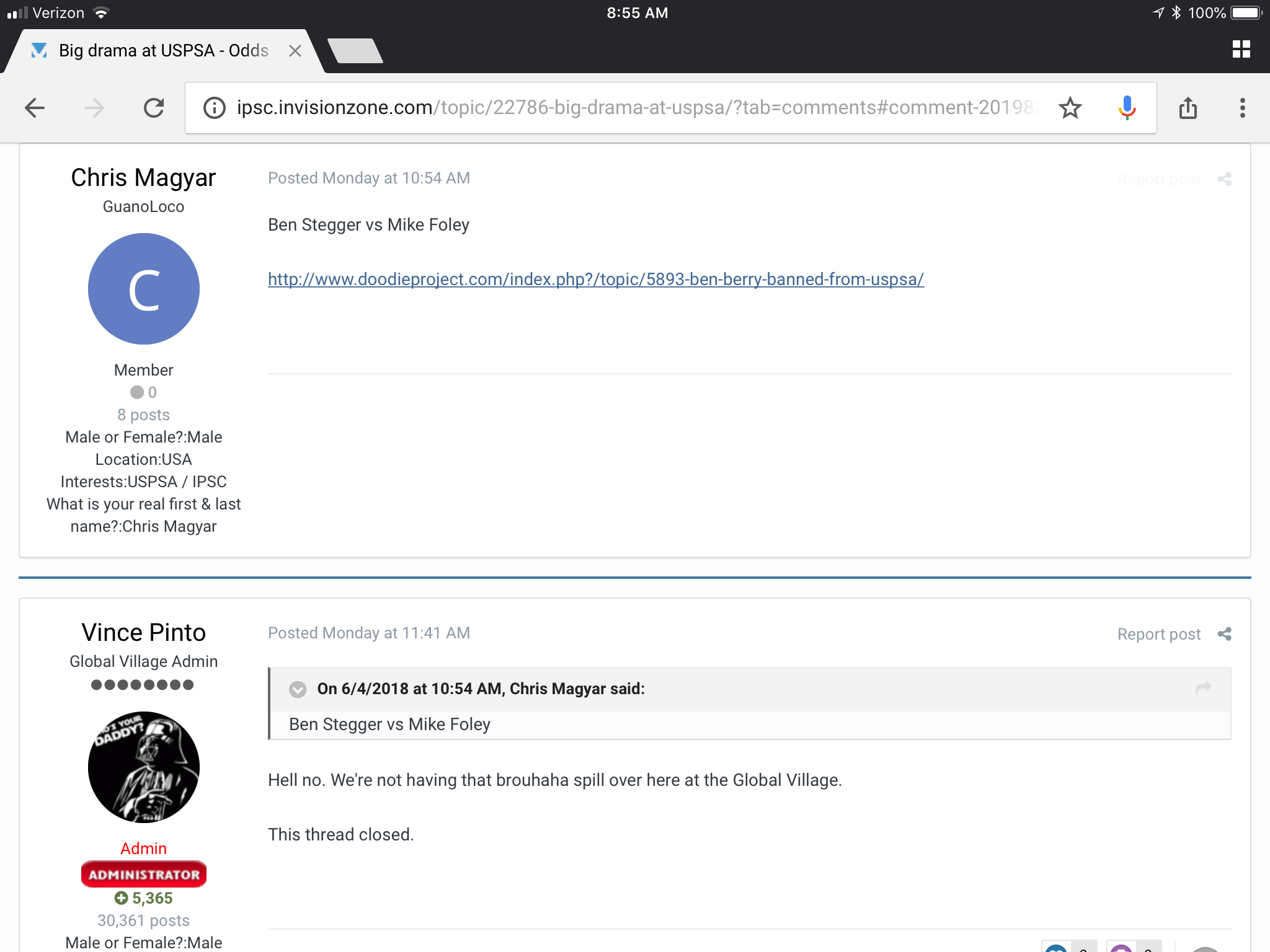 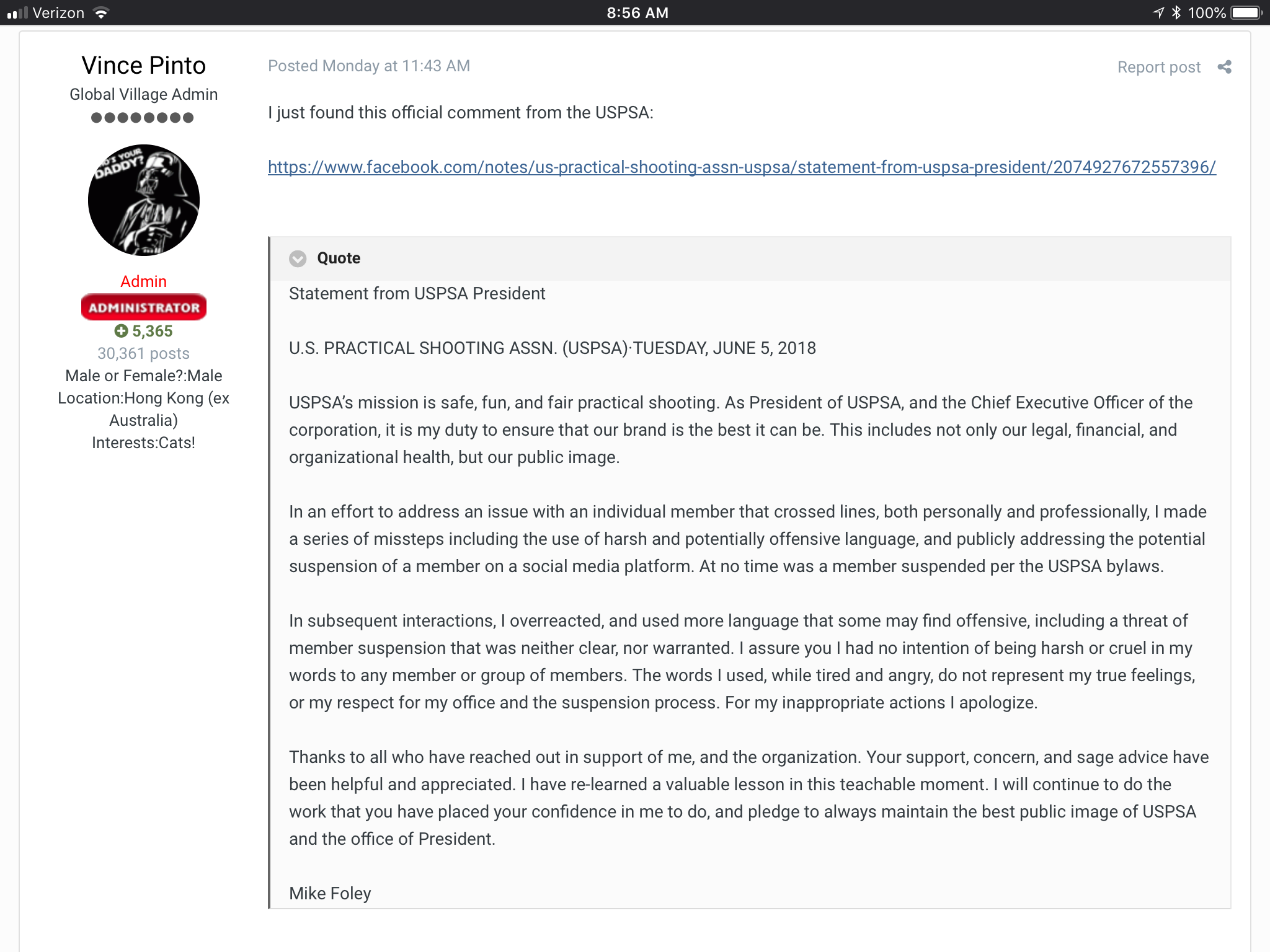 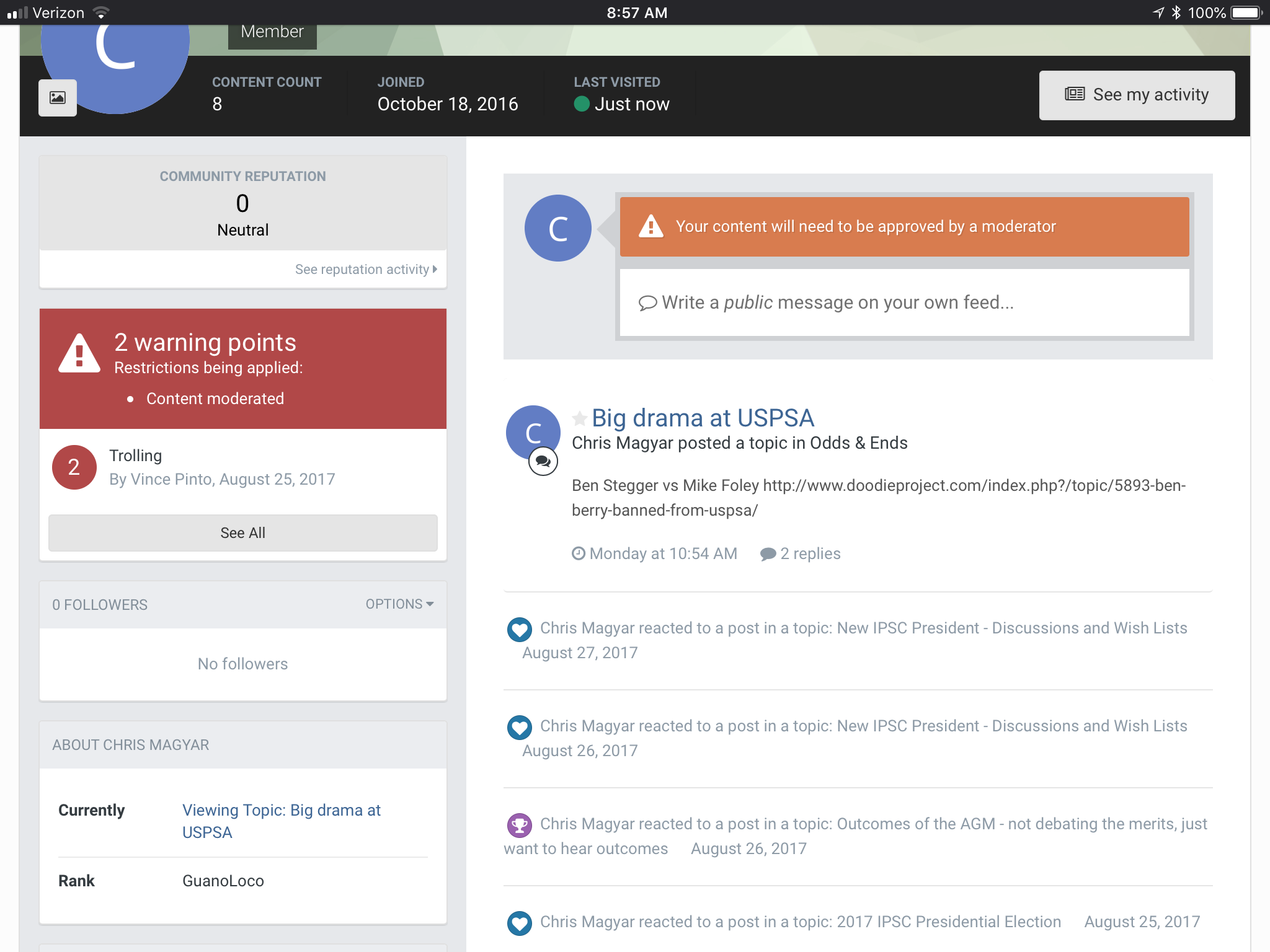 Vince is a useless piece of shit of the highest order. He can go to hell, he earned his firing from IPSC.

Shit, next thing you know he'll be posting that you/he??? voted for Hillary.

What do you expect from the guy that emailed me this?

He no longer holds any position or authority within IPSC, correct?

I received feedback that my initial post in this thread might not be 100% clear.  I was in a hurry trying to get ready to go shoot; my apologies.  Let me do a better job of capturing the information before it mysteriously vanishes into the ether.

Here is a PDF of the thread that Vince Pinto started while impersonating me on Global Village, including his responses.  I did NOT make this post.

Here is a PDF of my profile on Global Village, which Vince  Pinto tampered with.  Note my rank is set to "Guano Loco" in a maneuver designed to (I assume) reverse-doxx me back to my Doodie account.  Note also the restriction on the account: "Your content must be approved by a moderator", meaning that I COULDN'T AND STILL CAN'T make a post without Vince's approval.

Back in August, my posting access was restricted by Vince, the forum owner/administrator and IPSC Presidential Candidate, for "Trolling". Or was it restricted for posting information which Vince didn't like?  You be the judge,   My shocking posts on the 2017 IPSC Presidential Election are listed in my profile, and below if the full text wasn't in the profile.  After the restriction all my newer posts were all summarily ignored and/or deleted.  I stopped even logging in, until the 6/10/2018 where I noticed that Vince decided to take over my Global Village account and post "as" me.

I'll end this note by pointing out that my August 16, 2017 prediction has come true: Past behavior is the best predictor of future behavior.

In my opinion, based on past and even current behavior, Vince has no business at the helm of IPSC or any other organization.  The fact that he is still operating the defacto, private forum for IPSC, boldly using the IPSC brand, is embarrassing to IPSC members and the IPSC organization.

What the sport needs now more than ever is transparency.

The closed thread disclosed information that is invaluable in making the best choice for IPSC President.

A whistle-blower blew a loud whistle.  The whistle-blower was attacked, numerous mis-directions occurred, aspersions were cast, and counter-attacks were made.  In my brief assessment I did not notice that the shocking claims of the whistle-blower were disputed in any meaningful way.

The thread was then closed.  Tell me, how does this serve the interests of IPSC and its members?

The matter should be assessed - and will be - on this unofficial forum or on another.

Draw your own conclusions.

In behavioral interviewing of a candidate, the interviewer strives to focus not on the words, but on the past and present behavior(s) of the candidate.

Seems to be a shared mindset with the beard.  does this mindset prompt one to run for shooting sports president type spots? or is this mentality something the proper candidate must exhibit  to get the job in the first place?

Easy there big fella, I wouldn’t go as far as to lump Mike Foley in with the likes of Vince Pinto.

Vince is in a league of his own.

Foley just goes on random ragers when he's sleepy, Pinto is Uncle Jack spiced with about 9 other personality disorders.

I wonder how long this lasts 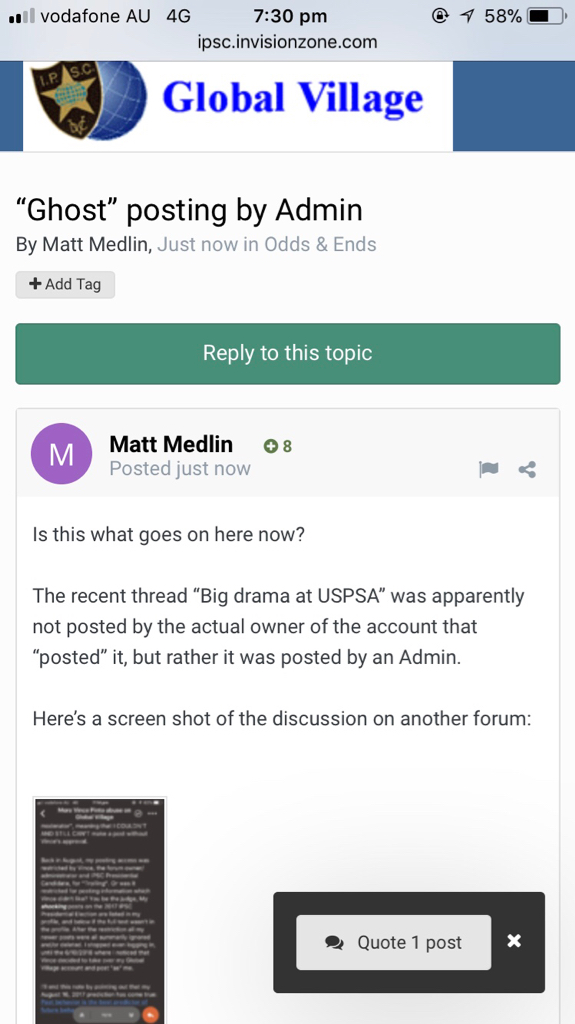 Sent from my iPhone using Tapatalk

He no longer holds any position or authority within IPSC, correct?

I wouldnt be surpised if he managed to get some sort of position in Hong Kong though. Airsoft regional director or some some stupid shit like that.

What makes you think they want him?

As far as I heard he doesnt act like a complete asshole irl, as he does online.

I was perusing the Terms of Use at the IPSC Global Village, wondering how many of his own terms that Vince violated.

Vince clearly needs to censure himself, and perhaps even to suspend or expel himself from the GV forum.

Please take a moment to review the rules detailed below. If you agree with them and wish to proceed with the registration, check the box, then click the "Create Account" button.

1. You must state your common real name (e.g. "John Smith" or "Chan Wai Ming") as your DISPLAY NAME when registering.

If you use an alias or an abbreviated name as your DISPLAY NAME, your registration will be deleted without notice. Your LOGIN name can be anything you like to use.

2. All approved registrations will initially result in you being registered as a "Member". However if our records show that you are also an IROA Official, your membership will be upgraded to "IROA Member" within 24 hours, in which case you will also have access to the IROA Members Only Forum.

3. We are not responsible for the content of any messages posted, nor do we vouch for or warrant the accuracy, completeness or usefulness of any message. Messages posted represent the views of the author of the message, in their personal capacity, not necessarily the views of IPSC or of this forum. Note that "Third Party" posts (i.e. those actually or reputedly made on behalf of other persons), are prohibited and will be deleted, and the poster will be subject to censure.

4. You agree, by continuing with registration, that you will not use this forum to post any material which is false, defamatory, inaccurate, abusive, vulgar, hateful, harassing, obscene, profane, threatening, invasive of a person's privacy, or otherwise violative of any law. We will not tolerate personal attacks against any person. Any user who feels that a posted message is objectionable is encouraged to contact the Admin or a Moderator by email, by personal message or by clicking the "Report" button below the offending message.

5. We reserve the right, at our sole and absolute discretion, and without notice, to edit or delete any post and/or to suspend or ban the person who posted it.

6. By continuing with registration, you agree not to post any copyrighted material unless the copyright is owned by you, or you have the necessary permissions from the copyright owner to reproduce the material on this forum. You further agree that, once posted here, messages become the property of the forum owner and they may not be reproduced elsewhere without the prior written consent of the original poster or the forum Administrator.

7. Registrations are personal to the applicant and must not be shared. Hence, one person may not use the membership of another person to read comments, post comments and/or to extract (e.g. "cut and paste") comments made here and to post them elsewhere. Members who allow their memberships here to be used by others will be subject to suspension or expulsion.

As far as I heard he doesnt act like a complete asshole irl, as he does online.

It's harder to get away with being a dick in person.